“—and above all the low chant of their traveling song which the riders sang as they rode, nation and ghost of a nation passing in a soft chorale across that mineral waste to darkness bearing lost to all history and all remembrance like a grail the sum of their secular and transitory and violent lives.”

—– Cormac McCarthy, “All the Pretty Horses”

The land grab of white settlers moving Westward and the killing out of the buffalo were certainly two of the biggest threats to the Comanche Nation of the Great Plains, but another was white man’s technology—the railroad.  It gradually slithered across the Llano Escatado like a belching, billowing serpent.  In this most recent painting, “The Chief’s Dream”, I have depicted a nightmare Chief Quanah Parker might have had.  The sinister train in his dream is charging toward him edging him partially off the canvas under a full moon, known as a “Comanche Moon because the full moon was when Comanches raided white settlers’ cabins.  The Comanche Moonstruck terror in the hearts of white settlers but this time the Chief is being raided.  There is a new Chief coming to the prairie in this evil incarnation and if you look closely the engine has the face of a skull with a hint of a headdress.  Years later, the Santa Fe Railroad actually named one of their engines, “Chief”!   A couple of other subtleties include faint graffiti lettering “Chief” on the side of the coal car and the tracks are actually opposing arrows which to the Comanches was a sign of war.  Chief Quanah Parker’s war staff is broken and a Scissor Tail Flycatcher has momentarily perched on the broken staff.  The Scissor Tail Flycatcher appearing in a dream was a sign of a cutting with the past to the Plains Indians and the double diamonds with a dot in the center was a symbol for the medicine man which meant a predicting of the future.  Scissor Tail’s tail is cutting the Medicine Man symbol to bits as they pass between her tail feathers.

Again, this painting is another in the series I have been working on. I used 120 years old, handwritten deeds from Parker County, glued to the canvas, as a base for the work.  These documents take on special meaning because Parker County was named after Isaac Parker, Chief Quanah Parker’s Mother’s uncle.  This is a reference to historic, Native American Ledger Art.  The acrylic painting is 48” x 48”.   Price available upon request.

The Comanches were not a peaceful First Nation tribe and they lived a transitory and violent life which was very difficult to sustain, even without the multiple threats of the white men.  But even this at-risk existence was changing.

Art is storytelling…but with more than just words…..

The land grab of white settlers moving Westward and the killing out of the buffalo were certainly two of the biggest threats to the Comanche Nation of the Great Plains, but another was white man’s technology—the railroad.

This is a reference to historic, Native American Ledger Art.  The acrylic painting is 48” x 48”.   Price available upon request. 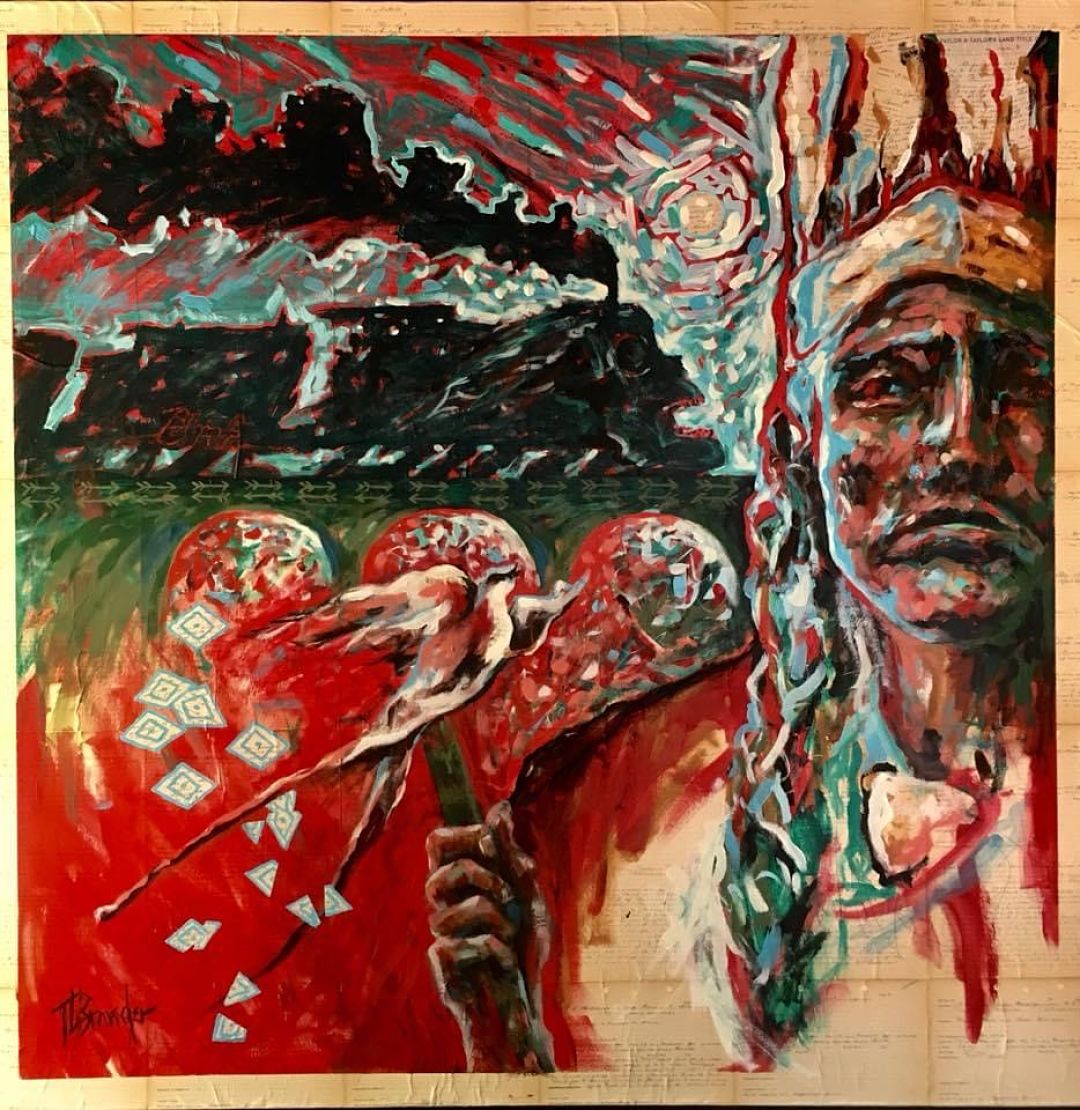