Cry of the Prairie Flower (SOLD)

These art prints have been hand-painted with a mix of inks in our home studio in New York. These wave studies have been created inspired by living by the sea and being exposed to the Miami sunny beaches.

“Cry of the Prairie Flower”

—as she realized she was about to be overtaken, she held her baby, “Prairie Flower” high in the air in dramatic surrender—

“During the conflicts between the Comanches and the white settlers, the men were usually killed, but it was the women and children who invariably suffered captivity and unspeakable atrocities, both Indian against white and white against Indian.”

In 1860, on a retaliatory mission for the recent, Comanche raids against white settlers in Jack, Palo Pinto, and Parker Counties, 23-year-old Captain Sullivan (Sul) Ross, who later in his career became Governor of Texas and President of Texas A & M University, led a group of Texas rangers through Northwest Texas.  Near Mule Creek, a tributary of the Pease River they surprised a Comanche hunting party, comprised mainly of women and children.  The location was a few miles northeast of present-day Crowell, Texas.   History books call this the “Battle of Pease River”, but it would more accurately be described as a massacre.  Most of the men were away hunting, and the almost defenseless women and children were all killed except for a young boy taken captive, and a woman and her baby girl who fled on horseback.  Captain Ross chased after her and —as she realized she was about to be overtaken, she held her baby, “Prairie Flower” high in the air in dramatic surrender—Halting his gunfire, he was astonished to see that she was not Indian, but was a blue-eyed, white woman, who he would later discover was the legendary Comanche captive, Cynthia Ann Parker and her infant daughter, “Prairie Flower”.

My painting entitled “Cry of the Prairie Flower” depicts the historic recapture of Cynthia Ann Parker and her infant daughter “Prairie Flower”. The subject matter has double inspiration—the rugged, yellow bloom of the native, prickly pear cactus, the Prairie Flower, and the inhumane brutality suffered by the women and children on both sides, a subject not easy to discuss in detail.  The colorful sunset, the burning teepee and the desperate attempt of a mother to save her baby, “Prairie Flower” are illuminated by an otherworldly color palette and expressive brushwork.

This painting is part of a series and the ground for the painting is influenced by the Ledger Art of the Plains Indians who drew and painted on recycled paper and documents they sourced from scouts.   Handwritten, 1890s deeds, from Parker County, Texas, that conveyed land once controlled by the Comanches are used.  There is a deeper level of meaning in that Parker County was named after Isaac Parker, Cynthia Ann Parker’s uncle, who searched for her for two and a half decades.  I have incorporated actual history pertaining to the event within the artwork.

This acrylic and historic document piece is fairly large—48” x 60”, and Native American symbols tell part of the story.  At the very top of the painting are pink diamonds in the sky with a circle and a dot inside, creating a halo around the child.  This is a Plains Indian symbol for the “Great Spirit”. The motif of the square with an “X” inside is a Plains Indian symbol for HELP and they emulate from the center of the Prairie Flower around the mother and child and upward as a symbolic cry for help to the Great Spirit.  Because of the terror and helplessness of the moment, even the cactus blossom cries out to the Great Spirit for help!

Painting is a redemptive act both on the part of the artist as well as the viewer.  In addition, when art becomes Story, it reaches another level of the redemptive expression by validating, repeating and remembering.  Art’s language and visual vocabulary powerfully transcend mere words…. 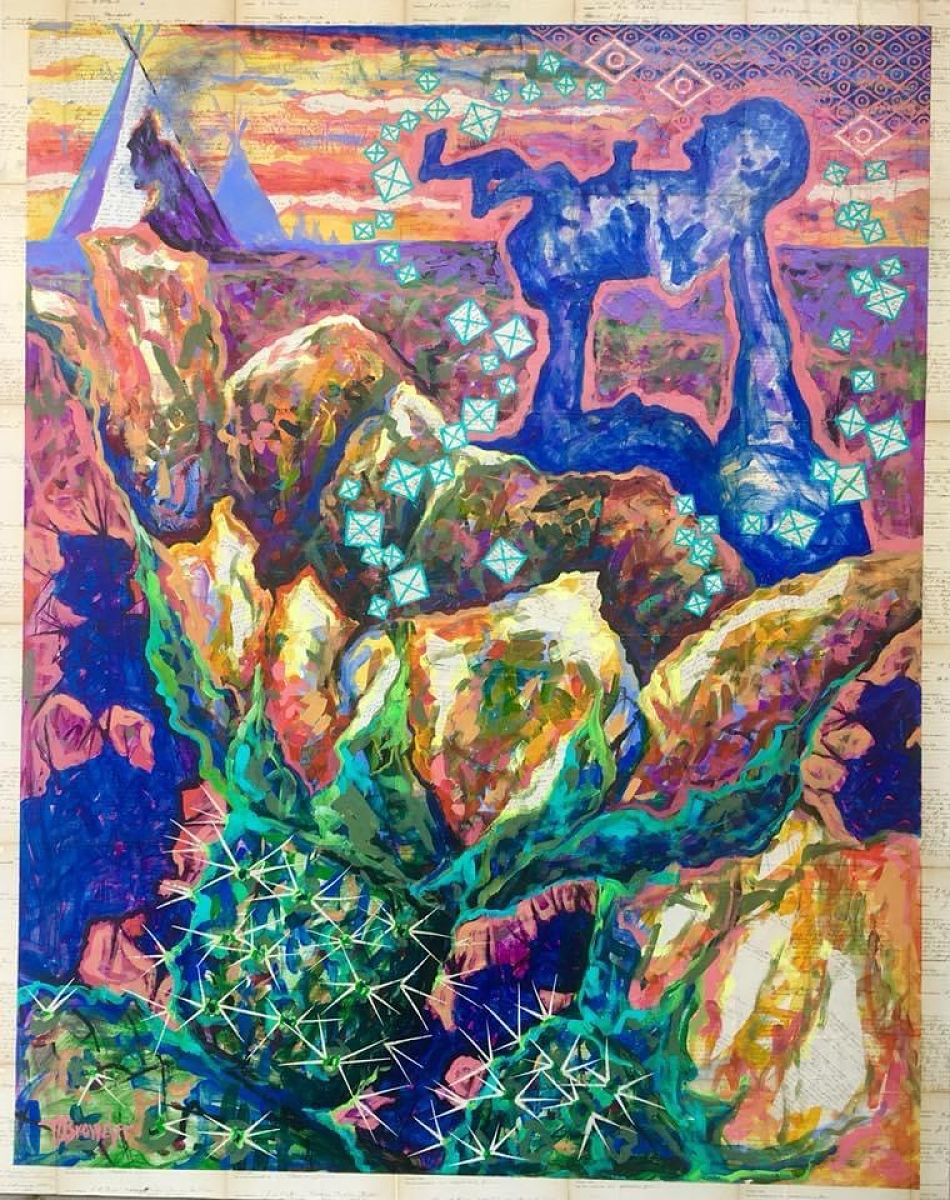